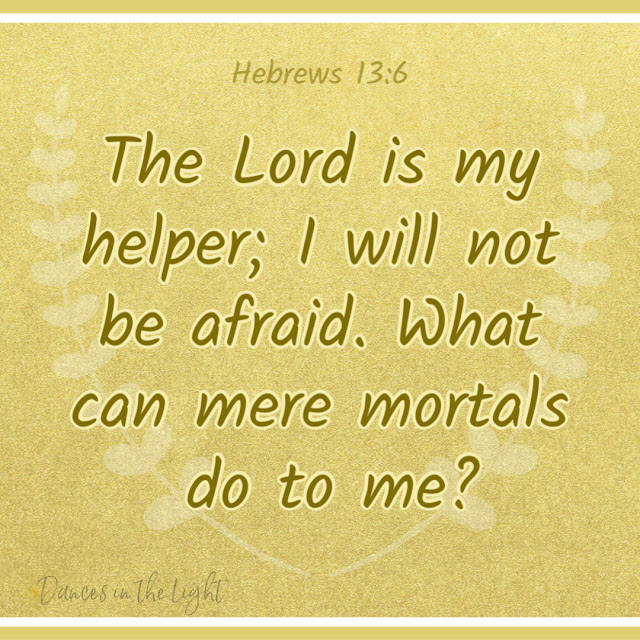 So we say with confidence,
“The Lord is my helper; I will not be afraid.

What gives us the confidence to have such faith? The previous verse (Hebrews 13:5) states, in part, "God has said, “Never will I leave you; never will I forsake you.”

God made that promise to Joshua in Deuteronomy 31:6 and Joshua 1:5. Over and over in the Bible, we see examples of God's faithfulness. He is always with us. Even when we don't feel His presence, He's there; often times working behind the scenes for our benefit.

My friend, Amber, was having a really tough time at work. She had a new boss who seemed to have taken an instant disliking to Amber. No matter what she did, Amber couldn't seem to please him. He found fault with everything she did. Amber feared that she would lose her job and she turned to God, asking Him to change the boss's opinion of her. Her pleas were met with silence. She felt as though God had abandoned her, just when she needed Him most. As the constant criticism of her work continued, Amber began to lose confidence in her abilities. She dreaded going to work, to the point that she felt sick and anxious every morning. As the weeks went on without any improvement, Amber also began to lose her faith in God. Why wasn't He doing anything to help her? Why would He let her go through this anguish? She couldn't afford to lose her job, but she was beginning to think that quitting was the only way to end the stress of the constant criticism. That was, until a former co-worker called to encourage Amber to apply for an opening at her company. The work was similar to her current job, with more autonomy and more pay. She hadn't considered leaving her current job, but this sounded like an ideal opportunity, especially given her current situation. The interview process went smoothly and quickly and soon Amber was enjoying her new employer and responsibilities. It was only then that Amber realized that God hadn't left her. He knew the boss would never change his opinion of Amber, so He'd been working on something better for her. Amber dropped to her knees at this realization and thanked God for his faithfulness and asked forgiveness for her unbelief.

When darkness seems to envelope us, it's easy to lose sight of God's promises. It is during those times that we should hold tight to God and trust that He is working for our good.